Al-Quds Open University is an administratively, academically and financially independent public University. In 1975, the urgent need of the Palestinians for higher education in accordance with their demographic, social and economic situation under the Israeli occupation generated the idea of establishing a university that would meet the needs of the local community. Consequently, upon the request of the Palestinian Liberation Organization, UNESCO conducted a feasibility study in 1980 to initiate the project. The study was later approved by UNESCO General Conference and later by the Palestinian National Council in 1981, but the execution of the project was delayed until 1985.

In 1985, a temporary headquarter in Amman was founded with the approval of the Jordanian Ministry of Foreign Affairs. From 1985 till 1991, the efforts were focused on preparing comprehensive study plans for different academic specializations, faculties, and the production of educational materials such as textbooks and teaching aids (mainly audio and visual ones).

In 1991, the university commenced its educational services, establishing a new headquarter in Jerusalem, and gradually introducing branches in major Palestinian cities. The number of enrolled students began with hundreds, and annually increased to reach 45,000 students by the end of the first semester of the Academic Year 2018/2019. The first graduates of the University received their certificates in 1997.

The University faced two major challenging events while laying its foundation. The first one was the first Intifada (civil uprising) which erupted in 1987 against the Israeli occupation. The Second challenge was the First Gulf War and its destructive economic and political consequences on the Palestinian society. Nevertheless, the University continued to adhere to its principles and mission, inspired by the strong will and efforts of its previous leaders, to ensure that the University will always remain a vital source of educational enlightenment.

The University sought and is still seeking to spread open learning and E-learning in particular, not only in Palestine, but also in the entire Arab world to access larger number of beneficiaries, students, trainees, and those seeking knowledge and education. The University is keen on promoting freedom of thought, opinion, creativity, innovation and excellence. 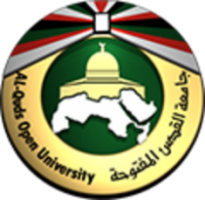