Banasthali Vidyapith is a fully residential women's higher education institute which offers an integrated system extending from the primary to the Ph.D. level.

It was on October 6, 1935 that Smt. Ratan Shastri and Pandit Hiralal Shastri founded Banasthali to fill up the vacuum caused by the sudden death of their highly talented and promising daughter Shantabai. They had high expectations that she would work for women's cause when she would grow up. But  destiny  ordained  otherwise.

Thus, Banasthali  owes its existence neither to the zeal of an educationist, nor to that of a social reformer. It is also not the creation of a Philanthropist's purse. It has arisen like the fabled phoenix from the ashes of a blossoming flower Shantabai.

Banasthali is one of the five higher education institute in India meant exclusively for Women. Over these seventy five years Banasthali has developed into a National Centre for women's education. Banasthali's educational programme aims at an all-round development of the student's personality. To achieve its objective of 'synthesis of spiritual values and scientific achievements of the East and the West', it has evolved Five-fold Educational Programme (Panchmukhi Shiksha) comprising of  the following aspects : (i) Physical, (ii) Practical, (iii) Aesthetic, (iv) Moral and (v) Intellectual. This way the students develop an integrated and balanced personality. 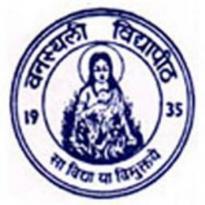 Actions towards sustainability for this university