WMO Statement on the State of the Global Climate 2019 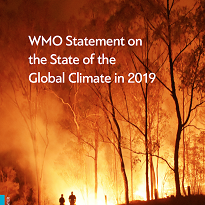 WMO Statement on the State of the Global Climate 2019

Key findings of the reporte include:

- The ocean absorbs around 90% of the heat that is trapped in the Earth system by rising concentrations of greenhouse gases. Ocean heat content, which is a measure of this heat accumulation, reached recordhigh levels again in 2019.

- The global mean temperature for 2019 was 1.1±0.1 °C above pre-industrial levels. The year 2019 is likely to have been the second warmest in instrumental records. The past five years are the five warmest on record, and the past decade, 2010–2019, is also the warmest on record. Since the 1980s, each successive decade has been warmer than any preceding one since 1850.

- The year 2019 saw low sea-ice extent in both the Arctic and the Antarctic. The daily Arctic sea-ice extent minimum in September 2019 was the second lowest in the satellite record. In Antarctica, variability in recent years has been high  with the long-term increase offset by a large drop in extent in late 2016. Extents have since remained low, and 2019 saw record-low extents in some months.

The full report can be found here.